Get Hooked With Me

This week for my Hook I’m playing with a snippet from my sci-fi romance Project Genesis. Vin gave up on the woman who claimed his heart when the government forced him into a military genetic enhancement program. When aliens attack Earth his path runs into the very woman he sought to avoid. 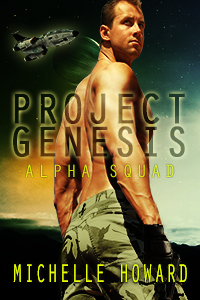 Amazon
Smashwords
Curtis took the lead and they all went down the hall back toward the stairway, Harkum bringing up the rear. Vin flicked his ear com back on and spoke. “We’re heading out.”

He received an affirmative from the others. At the entrance to the stairs, Vin passed his weapon to Harkum again. Curtis, Bransen and Harkum jumped over the pit to wait for the others. Vin signaled Nathan, Zander and Rock to do the same.

No one could miss the power in each man’s action. Muscles barely strained from their smooth leap. Helen swallowed thickly. Her eyes darted from his men waiting at the bottom landing of the stairs then back to him.

Please take time to see some other great hooks from my fellow authors at http://mfrwbookhooks.blogspot.com/