I’m excited to feature todays spotlight with Susan. I discovered Susan’s books almost exactly a year ago with her Marine series which featured space marines who had been abandoned by their government. Now I gobble her new releases up. She’s here today to talk about heroes and her latest sword carrying Alpha in Keepers of Sulbreth  🙂 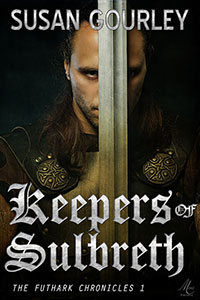 Thanks, Michelle, for having me on your blog today. You and I both write stories filled with heroines and heroes. What makes reader love them?

Too Good to Be True

Romance novels are filled with alpha males. Males filled with self-confidence and capable in battles of cleverness and physical challenges. But a man who brags, even if he’s telling the unvarnished truth, doesn’t come across as very likeable. What traits can one use to make sure readers love that alpha male?

A man can be confident without being cocky. My bastard swordsman, Cage Stone, knows he’s good with a sword and excels at all things dealing with warfare.

A hero doesn’t lift himself up by putting others down. He’s not a bully and protects those weaker than himself. He doesn’t need to make himself look good and seldom cares how others see him.

He will have qualities like honor, respect for others and intelligence. He’ll even be kind to animals. Children will see through his tough façade to the big heart beating in his chest.

But who wants a perfect ‘Prince Charming?’ Alpha males hide their insecurities and avoid any discussions of them. But the heroine who cracks through that self-protection can help him heal from whatever torment lurks in his soul.

All of Cage Stone’s actions and decisions are motivated by his desire to help his adopted family. Deep inside, he believes himself unworthy of their love. His impatience and distain of the nobility rises from his experiences of discrimination as an unclaimed bastard. Except for his family, many people find him unpleasant to be around.

What insecurities do you like to see a hero or heroine burdened with? What qualities do you see as very heroic?

Keepers of Sulbreth, Book #1 in The Futhark Chronicles is available today. Little does Cage Stone, mercenary swordsman, know that his king and the Keepers, mysterious sorceresses have set a trap for him. Using his sense of honor and duty, they convince him to join their battle against demons of the otherworld threatening to overrun the city of Sulbreth. Even as Cage commits his sword and soul to their cause, he discovers there’s much more lurking in the dark tunnels beneath the kingdom than the monsters stalking the night. Only accepting his elven heritage will give him and Sulbreth a chance to survive.

Susan Gourley is multi-published in high fantasy. She’s also writes science fiction romance as Susan Kelley and has numerous bestselling series. You can find her at Susan Says and follow her on Twitter or like her page on Facebook.