Welcome to antoher co-author from the Embrace the Romace-Pets in Space 2 anthology. Today Jessica shares with us her love of pets-specifically ferrets. LOL. 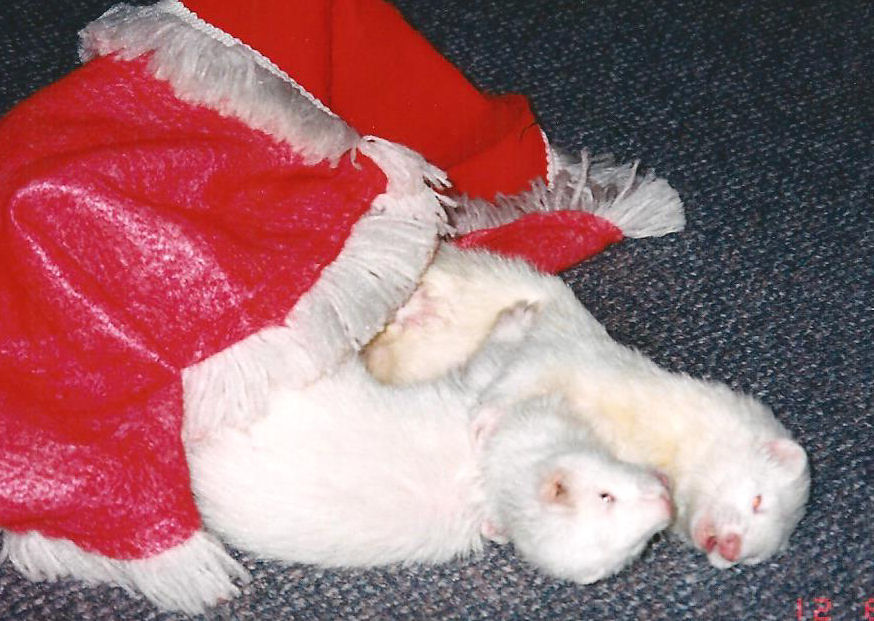 I have had many pets during my life, and one of the most fun pets I’ve had were ferrets. The only problem is, they are like having kittens all the time. They play, jump around, climb all over everything, and even bite. Not hard, thank goodness, but I had to remember to wear socks or slippers when they were out of their cage. My husband and I built a three-level cage for them that contained a litter box at the bottom, several hanging hammocks, and other toys to keep them occupied when they weren’t out running. Outside of the cage, they had a PVC pipe that wrapped around the couch. They would chase each other through it, and often come out the other end upside down. We also built them a carpeted house to climb, which they sometimes even dove out of.

Yes, ferrets do have a bit of a smell to them. Two of ours were descented before we adopted them, but the other never sprayed. Thank goodness. They loved having baths though. I would put a few inches of water in the tub, and let them swim around. They looked like white otters swimming around.

Ferrets get along with other animals, but as I mentioned earlier, they are very kitten like, not only in their curiosity, but they also play rough. On one weekend, we dog sat for friends of ours. They had a large Rottweiler, and he stayed with us while they were away. We decided to let the ferrets out to see how they would react to each other. The Rottweiler lived with cats, so he was already used to other animals. Well, have you ever seen a Rottweiler dance? He was so worried about stepping on them as they rushed toward him, that he looked like he was dancing as he kept picking up his feet. We didn’t keep them out for long that day, but it was an interesting interaction. 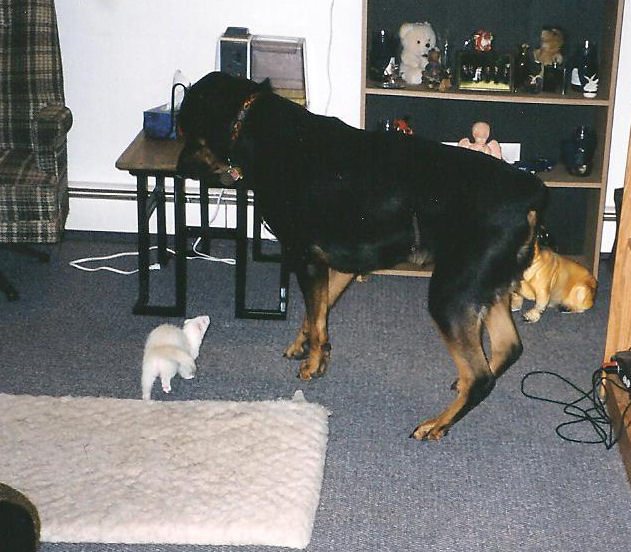 The ferrets were fun pets, and they always kept us on our toes.

Gib and the Tibbar

A Novella in the Galactic Defenders Series

A dedicated Defender to the core, Gib is willing to go to any planet the Galactic Alliance sends him. That is, until he’s sent with his squad to Hemera for their Alorama ceremony, far from any threat of Erebus invasion and with no chance for promotion.

Vilarra has lived on Hemera all her life, working hard in the kitchens of the royal palace until she achieved lead hand. But learning of the universe beyond her world reveals her insignificance and shreds her sense of accomplishment and purpose.

With the help of a furry, little tibbar, Gib is determined to win the affection of Vilarra, prove to her how significant she is to him and the people who depend on her. But will his personal mission be cut short before he has the chance to win her heart?

The pets are back! Embrace the Romance: Pets in Space 2, featuring twelve of today’s leading Science Fiction Romance authors brings you a dozen original stories written just for you! Join in the fun, from the Dragon Lords of Valdier to a trip aboard award-winning author, Veronica Scott’s Nebula Zephyr to journeying back to Luda where Grim is King, for stories that will take you out of this world! Join New York Times, USA TODAY, and Award-winning authors S.E. Smith, M.K. Eidem, Susan Grant, Michelle Howard, Cara Bristol, Veronica Scott, Pauline Baird Jones, Laurie A. Green, Sabine Priestley, Jessica E. Subject, Carol Van Natta, and Alexis Glynn Latner as they share stories and help out Hero-Dogs.org, a charity that supports our veterans!

10% of the first month’s profits go to Hero-Dogs.org. Hero Dogs raises and trains service dogs and places them free of charge with US Veterans to improve quality of life and restore independence.

Universal Link for All Stores:

A small, furry white creature scampered between the Defenders and the fire. Gib yanked his feet back and gasped. He tried to follow the path the animal took, and when it disappeared into the grassy field, he relaxed a little. Not that he was afraid, only startled by the sudden appearance of the critter.

But his watch partner reacted differently. The cowardly Defender stood on his bench, reaching for a low branch on the ropral tree as if to lift himself farther off the ground. “What in Gaspra was that? No one told me about any deadly creatures on this planet.”

Gib laughed and slapped his hand on his lap. “I wouldn’t call the fluffy little thing that raced by us a deadly creature.”

“Okay, Hemera is infested with vermin, then.” Zair examined the area around him before he dared put a foot on the ground.

A high-pitched squeak sounded, and Gib’s surveillance partner returned to reaching for the branches. The little creature stood on its hind legs below Zair’s bench, peeping as if telling him off.

Gib couldn’t hold in his laughter. Not just at the other Defender’s reaction, but also the thoughts running through Zair’s mind, thoughts he’d failed to block in his fear.

“It’s not going to eat you.” Gib shook his head, wondering how his squad mate could see the creature as dangerous. “Would you please get down from there? Defenders are supposed to be brave and fierce. Right now, you’re neither.”

“Go to Gaspra, Mingot. And stay out of my head.” He yanked his plazer from his hip holster and aimed it at the critter. “If I don’t destroy it, it will bring death to everyone on this planet.”

Stepping into the line of fire, Gib yanked the weapon from his squad mate, thankful the safety remained on. “You’re being ridiculous. Besides, if you fire your weapon, you’ll cause a panic. The Hemera will think Erebus have arrived.”

The frightened Defender shook a foot at the creature. “Fine, then. Kick it into the fire. Or you could stomp on it.”

“Don’t you dare!” A Hemera woman burst from the bushes, storming toward Zair like a mother rehn protecting her young. She shoved him off his bench and shouldered past Gib before scooping the noisy creature into her hand. “This is my tibbar, not some kind of vermin.”

“Tibbar? Try nasty rodent that tried to eat me.” Zair smoothed out his uniform but kept his distance from the creature now perched on the woman’s shoulder.

“You’re both on nehbred.” She kicked dirt at them, her pink lips pursed and her dark eyes set in a deadly stare. “You don’t know what you’re talking about when it comes to my pet or my planet.”

Jessica E. Subject is the author of science fiction romance, mostly alien romances, ranging from sweet to super hot. Sometimes she dabbles in paranormal and contemporary as well, bringing to life a wide variety of characters. In her stories, you could not only meet a sexy alien or two, but also clones and androids. You may be transported to a dystopian world where rebels are fighting to live and love, or to another planet for a romantic rendezvous.

When Jessica is not reading, writing, or doing dreaded housework, she likes to go to fitness class and walk her Great Pyrenees/Retriever her family adopted from the local animal shelter.

Jessica lives in Ontario, Canada with her husband and two energetic children. And she loves to hear from her readers. You can find her at jessicasubject.com.