To wrap the week up, I’m featuring an author spotlight on K. G. Stutts and her book Mirror Reformed. 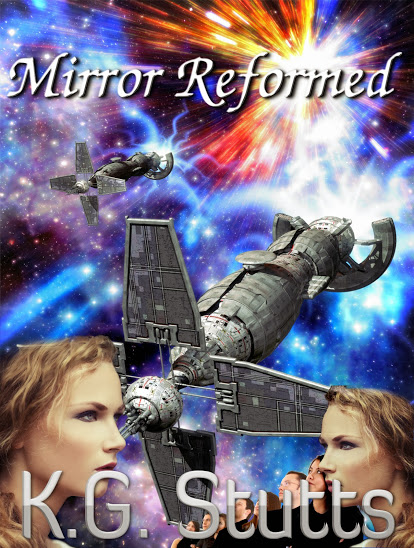 “So an alien race of unknown origin, strength, and power is coming our way. We’ve defeated them before but have no clue how we did it and we all died in the process.” Seth gave two thumbs up. “Awesome.”

The ISC’s most dangerous foe, the Synth, is threatening Earth. Mack, Maddie, and their team scramble to come up with a plan to defeat them one and for all. As the planet’s safety is in jeopardy, the team will have to put it all on the line, or give their lives in the process.

https://t.co/8l1boPt36m Use the link to get the book for .99 at http://store.distinguishedpress.com/

“Because they’ve done it before, and this is the team that stopped them.”

The team stared blankly at their former commander, trying to comprehend his words. The statement echoed in Maddie’s mind, making her hands shake.

“That’s insane,” Seth blurted out after several quiet minutes. “Remember my warning. What I said is hard to believe, but it’s the absolute truth.” Charlie looked unabashed at the group’s disbelief. “Charlie, what’s going on?” Maddie asked. “Most of you know the story of how the ISC was formed,” Elizabeth began. “Right. A young Charlie created a communications device that reached the Isgurd,” Mack stated. “We formed our first alliance with them.” “Correct. The rest of the story has been classified.” “Rest of the story?” Maddie looked over at John who looked just as confused as she did.

Charlie pulled up a video on the monitor and pressed play. The screen came to life as a young boy wearing wire-rimmed glasses and sandy blond hair falling in his eyes smiled and cleared his throat.

“My name is Charles Westlake. I am thirteen years old and I’m from Charleston, South Carolina. I created an intergalactic communications device that made contact with an alien race known as the Isgurd. I have recently been visited by a group of people from the year 2015. They came here to prevent an aggressive alien race known as the Synth from killing me, stopping my meeting with the leader of the Isgurd, Balise, and taking over Earth. This group was led by Jackson Gray, but my main contacts were Maddie and John Brooks. The team successfully defeated the Synth here in 1965. This message is to be preserved in case the Synth returns.”