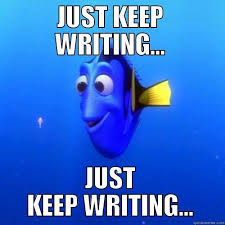 I should have known this nano would be different. The signs were all there that this would be a real challenge. Did I back down? Nope. Forged ahead like a lamb to slaughter and here I sit with 500 words on Day 3. LOL. 500! but that’s okay. I’m in the spirit, have my writing cap on and plan to do major damage tonight. If I hit 3k by week’s end I’ll count it a win. If I go over that, look out nano-ers 🙂

In terms of update, the story starts with my hero chatting with a friend and setting up the plot. I hope to get a couple of chapters of his background before introducing my heroine, the villain. I’m torn with her name. Since it’s sci-fi I want something funky but not too out there. Right now I have Anira but I met someone at Romcon who had an awesome name and I’m leaning toward that. (which I told her I’d do in a future book. LOL) If not, I’ll use it later. Naming characters and coming up with titles run a close second to picking covers.

How’s your nano going? Do you have more than 500 words. ROFL

3 thoughts on “#Nano…and it begins”