Coming soon is the 3rd book in A Novel of the Dracol. Below is a tiny peek. May release date to be announced. 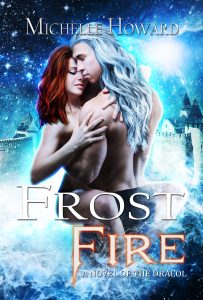 “Do you miss it?” Rena asked, catching the side of his silver vest before he could walk by her.

Faris had stopped, glanced down at the tug of material and eased her fingers away. His mouth curved up on the right in a lopsided grin that shouldn’t have been sexy but was. His amber stare pinned her to the spot. “Miss what?”

Rena had trembled. Was he being for real? What game did he play? “Us. Do you ever miss us?”

Then he’d delivered a blow more painful than any weapon she could have designed in her forge. He cupped her chin in his hand, lifted her face and countered in a voice dripping in pure ice, “What was there to miss?”

No words came to her. Faris caressed her skin with the soft brush of his thumb, a mockery of what they’d shared, and let go.

Madness has spread among the Dracol shifters one sect at a time. Now it has come to the Silver through their King. Instead of being the hunter, Faris is the hunted. As time goes on, it gets harder and harder to ignore the growing voices in his head. Especially when they tell him to kill the only female he’s ever wanted as his own.

Rena never understood why the male who owned her heart left her. She tried to move on, but no other lover compared to the silver-haired King. When opportunity presents itself, she must fight for what they could have or die trying.