Great News everyone. I received my cover for my upcoming sci-fi romance Honor Bound. Once again I love the wonderful job done by Viola at www.estrellacoverart.com. 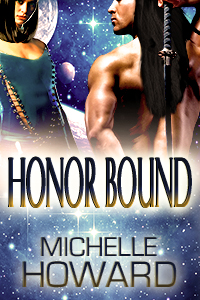 To save her people, Mikayla S’Apul has only two options: Become a prize in the upcoming battle or take control of her fate. When a worn journal falls into her hands revealing the secrets of a legendary group of warriors, Mikayla realizes it holds the answer to her prayers. A marriage of convenience is the only way to protect the Raasa people.

Overlord Vaan Galip is the commander of the Warlord army tasked with protecting Kabanians and bringing peace to his lands. Betrayed by one of his own, joining with Mikayla S’Apul would provide her people with protection while giving him the opportunity for vengeance. Falling for the Raasa female was never part of his plans.

When a common enemy threatens, Vaan and Mikayla learn the true depth of what it means to be bound not only by marriage but by honor.