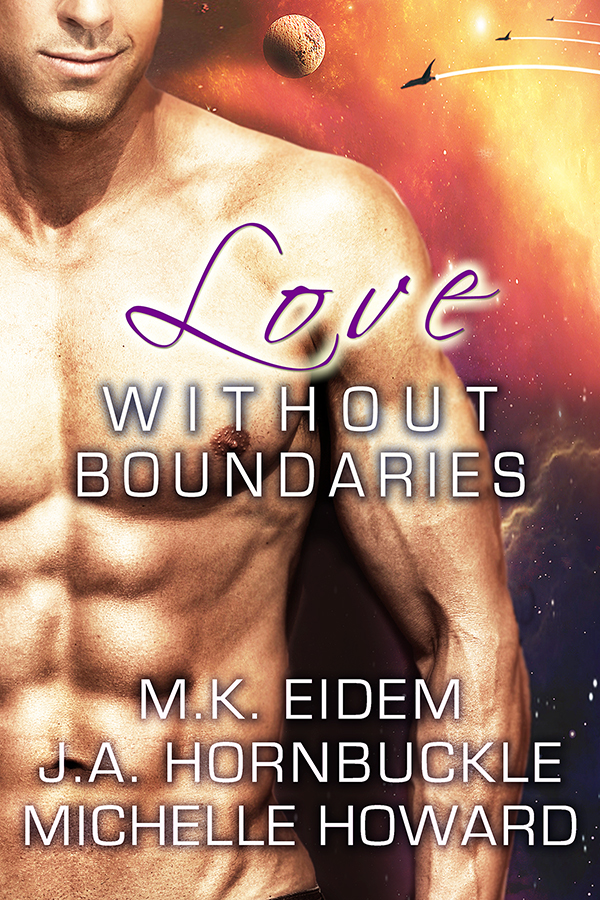 Love Without Boundaries contains three sci-fi novellas from MK Eidem, JA Hornbuckle and ME. 🙂 Below is an excerpt from my novella Mating Urge.

Ellie cracked her eyes open to find him studying her. His nostrils flared.

“You smell unbelievable,” he murmured and buried his face in her neck.

Ellie could actually feel him sniffing her. The heavy inhales followed by the soft exhales created light wisps of air against her skin.

More of his weight pressed into her. Every inch of his skin touched Ellie. Against her will, her hands reached up and caressed the truly amazing chest on display before her. He gasped when her fingers made contact with his male nipples.

“Yessss,” he hissed. “Touch me.” The subtle scrape of his teeth grazed her collar bone.

Heat exploded in her middle. Ellie’s hands stroked upward and delved into the thick strands of his hair. Thoughts of Palo and escape drifted away in the face of the luscious aroma emanating from his wet skin. What kind of soap did he use that caused the citrus scent?

His nose glided up her neck and nudged her ear. She willingly tipped her head to the side only to feel him nip her earlobe. Ellie jumped and he chuckled. Warm laughter pebbled the flesh at her nape.

“It’s been so long,” he whispered, lips trailing back down the curve of her shoulder. “I need. I hurt.”

His words said fervently against her skin caused desire to bloom in her center. The urge to rub herself all over him pulled her from the haze of sensual delight he weaved with his very touch.

Ellie released her grip on his hair and arched away from the soft lips nibbling on her neck. “Listen…uh, there’s been a mistake.” Had to be. “I don’t think I’m who you’re waiting for.” She wished she was.

“Mmmm,” he moaned and thrust against her. “Not waiting for anyone. Just want you.”