Happy Hump day and Hook day. Today I decided to switch to my upcoming release, Torkel’s Chosen. My hero is going through a selection ceremony and hasn’t had much luck in the past.

Torkel bit back his frustration as the females ran past his position in the sands. One after another they squealed and laughed as they selected his brethren. True Enotians with their blond hair and light-colored eyes. Through it all he maintained his stance with his hands clasped behind his back, legs spread wide. Another year, his last in the sands.

The ache in his chest caught him off guard. No matter how much he thought he’d prepared, disappointment coiled its way through his heart. To make matters worse, there was one more male in the numbers than females so he’d walk from the sands alone. His shame to bear in stoic silence.

“I’m not sure how this works. Do I just hand you the necklace or put it on your neck?”

Don’t miss out on others. Check here for your next book.http://mfrwbookhooks.blogspot.com/ 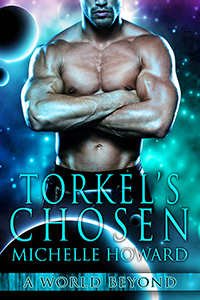