For those who have been waiting for the sequel to Rylin’s Fire my dragon romance, its almost here. That’s right, MK Eidem and I have teamed up again to bring readers the sequels to our dragon stories. Trial By Flame is available on all retailers and releases 11/22. In the US that’s our Thanksgiving holiday so plenty of time to get in some relaxing reading time. It’s also available now in print for those who love a book in your hand. Below is a snippet from my story in the Trial By Flame duet. 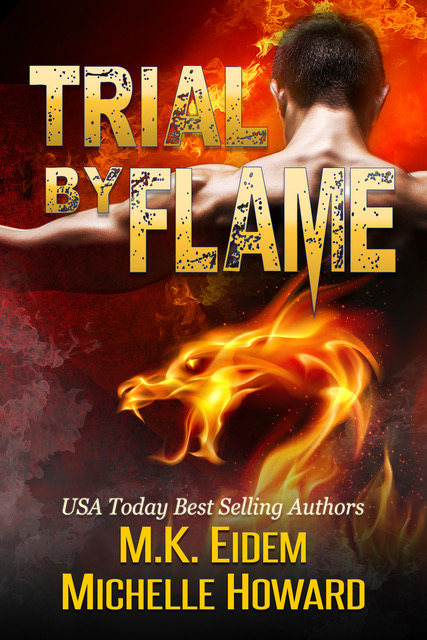 Three words which best described Varyk, King of the Green Dracol. Events in his life taught him to hold his heart back to avoid the pain of loss. To do so, he used his insufferable attitude as protection and it worked. Until fate came into play.

Inez is a soldier with the Black Dracol who has no problem saying what she means. Love and mating are for the distant future. Until an act of betrayal causes her path to cross an arrogant King.

Rylin must have hovered on the cusp of her mind, waiting. Cascading emotions slammed into her. Inez tried to convey her thoughts on the situation and sharp colors of black, silver and hints of purple pounded at her as his rage sought a target.

The desire to hunt Larz down and eat his beating heart before crushing his skull between brutal claws was a clear image in Inez’s mind. She flinched. Urgency followed the blood thirsty representation and a warning.

The shells were close to hatching. They would heat and blaze with the fire of the Black Dracol before cracking to release the new babies soon.

“The babies will be born soon,” she said in aside to Varyk.

Shadows reflected in his gold touched orbs. “First light, Inez. You have my vow.”

Reluctant, Inez agreed. There really wasn’t a choice. She pushed the need for trust along the connection. Reluctance and hesitation slid around her conscious before she sensed Rylin pull away and blinked. “Looks like I’m staying.”

An abrupt nod followed. With measured steps, Varyk walked toward her, only stopping when bare inches separated them. He cupped her jaw, tilting her face up to stare into her eyes. “Rest. Tomorrow I’ll be fully recovered.”

Inez quirked her brow, some of her humor and balance returning. “Does this make us partners?”

His smile chilled. “No.”